Proper Storage of Your Guitar

If there’s a perfect way to store your guitar, that’s definitely the hard-shell case. This is pretty much the most expensive accessory you can buy for this purpose (unless you also count flight cases which are a bit more specific in their use), but it also offers the highest degree of protection (again, after flight cases). After that you can also go with a gig bag, which is also good in terms of protection though not as much as the hard-shell case. Gig bags are padded on the inside, and are perfect when you’re carrying your guitar – but they don’t provide as much protection as you’d get from a hard-shell. And if you don’t have any case, or you want your guitar to always be visible, at least invest into a guitar stand.

The guitar stand does have its disadvantages though – you risk discoloring the guitar’s finish, and even though that’s not so common, you should still check on the guitar from time to time when it’s left on a stand. It’s a good idea to run a cotton cloth or even a simple t-shirt around the area where the guitar and the stand meet, in order to protect its finish.

One good reason to keep your guitar in a case is to protect it from any sudden changes in the environment, mainly in the temperature and humidity. Wood doesn’t generally react very well to such drastic changes in these factors, as well as when you’ve left it in some extreme conditions for too long. Thus, make sure you keep the guitar well away from heat sources, which includes any direct sunlight like in the back of your car during a hot day. 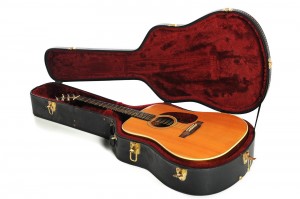 Acoustic guitar in a case

If there’s a chance that the guitar would be exposed to cold temperatures, let it get adapted to the cold slowly by leaving it somewhere with a relatively low temperature for an hour or so. You should also do that when you’re bringing it in from the cold.

If you own a gig bag, you’ll need to be more careful with the temperature in general, as those offer less protection against the sun and colder temperatures, compared to hard shells.

And in order to protect the guitar against humidity, don’t leave it in a place with high humidity such as the bathroom. High humidity is the only exception to the rule for keeping your guitar in its case. When you have it exposed (on a good stand and not leaning against a wall), you’re letting air circulate freely around it which is great for keeping it dry. If you’re in a dry climate in general, then in order to stop the wood from drying out you should use a guitar humidifier. Lack of humidity is far worse than an abundance of it!

All in all, what are the best conditions to keep your guitar in? Generally speaking, it’s around 68 degrees F and humidity around 40-50%; the basic rule for storing your guitar is to not subject it to any condition that you wouldn’t put yourself in.

Guitars should fit into their cases with as little spare room as possible, in order to stop it from moving around wildly and hitting the sides – something that’s particularly true with hard-shell cases.