Legendary Females of the Axe

“Rock and Roll is a man’s game.” Have you ever heard that being said, or implied? While it is true that most Rock musicians are male, there have been numerous women in the field who have more than held their own in the genre. Not only that, they blazed a trail for thousands of young women who aspired to become musicians. Here are several stories of women who revolutionized Rock.

Ann and Nancy Wilson of Heart 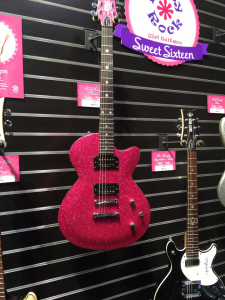 Beautiful guitar in a music store in San Diego

Any discussion of women who revolutionized Rock music must include guitarist/singer/songwriters Ann and Nancy Wilson of Heart. At the time the Vancouver-based band made their debut with DREAMBOAT ANNIE in 1976, most successful female rockers were of the soft-rock singer-songwriter type, Carly Simon and Carole King to name just a couple.

Although the title track proved they could have a soft touch when they wanted, it was the other two singles from that album, MAGIC MAN and CRAZY ON YOU that proved this was an entirely different beast. Heavily influenced by Led Zeppelin and the Beatles, the Wilson sisters showed they could rock as hard as their male counterparts. Ann, who occasionally plays guitar with the band, has an amazing vocal range, and Nancy (in collaboration with guitarists Howard Leese and Roger Fisher, among others) can play rhythm guitar with the best of them. Although the lineups of the band have changed numerous times over the years, Heart is still a strong concert draw and releases great new music every few years.

The Runaways were an all-girl group formed by rock impresario Kim Fowley in the mid-1970s. Dismissed by critics at the time as a crass marketing ploy, they have since gained respect for not only being one of the first all-girl groups to rock hard, but for launching the careers of Lita Ford, Cherie Currie, and most importantly, Joan Jett.

Because of internal strife and creative differences within the group as well as frequent clashes with the Svengali-like Fowley, the band had a brief life, breaking up for good in 1979. Cherie Currie released a couple of solo albums, and then branched out into acting. Lita Ford made a successful solo leap into metal and hard rock, including the singles KISS ME DEADLY and CLOSE MY EYES FOREVER (a hit duet with Ozzy Osbourne). The most successful former Runaway is Joan Jett. Unable to secure the support of a record company for her solo work, she started her own label and released her first solo project, BAD REPUTATION, independently (an audacious move in that era). The album’s success led to a recording contract and her first big hit, 1981’s I LOVE ROCK AND ROLL. A much-rumored Runaways reunion has never materialized, although Ford and Jett both continue to release successful albums and tour regularly.

Recommended Listening: LITA (Lita Ford), I LOVE ROCK AND ROLL and ALBUM (Joan Jett), THE BEST OF THE RUNAWAYS

Future installments will feature prominent guitar goddesses of the 1980s and beyond, as well as renowned bass players.