An Introduction to the Origins, Importance, and Usage of Guitar in Country Music

The Origins of Country Guitar

Country music came into being during the early 20th Century, containing elements of Folk (from the Appalachians) and the Blues (from African-American traditions of the South). At first heard only in the South, it eventually made its way to Texas, the West Coast, and finally all over the US. It is currently the most popular genre of music being broadcast over radio in America, particularly during morning and rush-hour time slots.

Although the genre started off using Spanish guitar (a result of European immigrants coming to the Appalachians), the more traditional (to country) steel-string guitars took over. Electric guitars were seldom used until the late 1940s (Bob Wills’ band being a notable exception). Archtop electrics, such as those made by Gibson and Gretsch, became the norm at that time. Fender models such as the Telecaster eventually replaced archtops in popularity and usage in the 1950s.

Sounds and Tones of Country

There is an extremely wide spectrum of guitar tones used in country, and once a sound is established, it never goes away. Take for example the neo-traditionalist strain of recent years, epitomized by artists like George Strait, Alan Jackson, and Randy Travis, which supplanted the “Countrypolitan” and Pop-Country sounds popular in the 70s and 80s.

As stated before, acoustics were typically used in the beginning but as many guitar-based recordings sounded muffled, more and more electrics were used to bring the guitar sound forward, both in recordings and in live performance.

What separates country guitar from other genres is that relatively few effects pedals are used. Country is famous for being a straight-ahead, “honest” form of music that doesn’t need trappings. Slide guitar is often used as a form of “orchestration,” as are fiddles and other string instruments, so the necessity of the guitar to perform that function is reduced.

As in many other guitar-based genres, the sound is as much a result of the playing technique as it is the sound produced by the instrument. From the punchy style of Lester Flatt (Flatt and Scruggs, known for the Beverly Hillbillies theme) to the rockabilly stylings of James Burton (Ricky Nelson, Elvis Presley, and many others), Country has had its share of guitar greats. Many legendary singers and songwriters, such as Roy Clark and Willie Nelson, are known as much for their unique guitar styles as for their singing. Nelson has used the same Martin acoustic onstage and in the studio for decades, while Roy Clark uses a Heritage Guitar signature model.

Country guitar uses several picking styles; we will go over just a couple.

With Carter-style playing (named after the legendary Carter family, which has included Mother Maybelle Carter and June Carter Cash) you play the melody on the low strings with the thumb while the fingers provide an accompaniment in the form of brushes.

This style works well for songs with melody notes that fall mostly on beats 1 and 3. (The brushes occur on beats 2 and 4.) But if a melody note falls on beat 2 or 4, you can simply omit the brush on that beat.

Another style is Travis picking (named after country guitar legend Merle Travis), which is also used in Folk and Rock. The Travis picking technique is achieved by alternating the thumb between two (and sometimes three) bass strings in steady quarter notes while the fingers pluck the higher strings, usually between the quarter notes (on the off-beats).

There are, of course many variations and alternate pickings, but try these out.

Country guitar is a very rewarding style of playing in a very popular genre. Even if it is not your preferred style, learning the basics can expand your horizons. 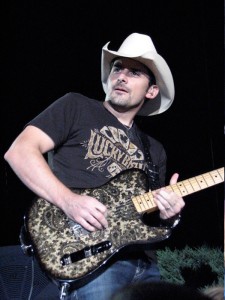