While rock music has been largely played by and marketed primarily to white audiences, it is truly a universally-loved genre. People of all races, colors, and creeds have enjoyed this music from the very beginning. Indeed, Rock and Roll sprang from the blues played mostly by black musicians in Chicago, the South and elsewhere, so it’s only natural that there would be rock musicians of color. This article reviews some of the many black rock innovators. 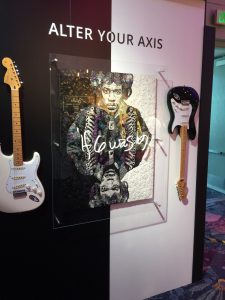 When we list the architects of Rock and Roll, the names Chuck Berry, Fats Domino and of course, Little Richard must be included. The now-familiar opening riff of Berry’s “Maybelline” is one of the defining moments of early Rock and Roll, as he sets the template for many of his (and others’) hits to follow.  Fats Domino, with his rollicking boogie-woogie piano sound, probably had the closest lineage to the jazz and blues styling that came before it. Hits like “Blueberry Hill” and “I’m Walkin’” exemplified his sound.

The one-and-only “Little” Richard Penniman has influenced countless rockers. With his flamboyant appearance and raspy, shouted vocals, he was often imitated but never really duplicated. He influenced many singers and performers, particularly Elton John and Paul McCartney.

No discussion of rock history would be complete without mentioning the singular impact of Motown Records. Although the Motown Sound would not be described by some people as “rock,” its profound influence was felt virtually from the beginning. From The Beatles’ hard-rocking cover of “Money (That’s What I Want)” to the eventual move to a harder-edged sound from Motown artists themselves (Stevie Wonder’s “Superstition” and The Temptations’ “Can’t Get Next to You” for example) helped to define the rock sound.

Coming out of England by way of Seattle, The Jimi Hendrix Experience changed rock forever. Over the course of only 3 studio albums, Hendrix stretched the limits of guitar, and is considered by many to be the greatest guitar player ever. His legendary performance at Woodstock has to be seen and heard to be believed.

The Experience also reflected a changing of the guard in rock, as multiracial bands began to dominate the airwaves. Groups such as The Chambers Brothers, War, and, of course, Santana created legendary music together, proving that music is the universal language. The Beach Boys recorded several highly-regarded albums and singles with South African, Blondie Chapin, on vocals and Ricky Fataar on drums in the early 1970s. Likewise, The Doobie Brothers have had numerous players of color during their 40-plus years as a band.

Another great singer-songwriter was Phil Lynott, the vocalist and bassist for the Irish hard-rock band Thin Lizzy, before his untimely death in 1986.

In the late 1980s, Lenny Kravitz and the band Living Colour had massive worldwide success. Kravitz was critically acclaimed right out of the gate with his debut, LET LOVE RULE, and continues to make innovative music. Living Colour was discovered by Mick Jagger, who got them signed to CBS Records and had them open for the Rolling Stones on their STEEL WHEELS tour. Their track “Cult of Personality” became one the biggest hits of the 80s, and is still a favorite.

Great music is colorblind, and can take us to places we never imagined. It is also a unifying force.