The Odyssey of Taylor Swift

Home / Other Resources / The Odyssey of Taylor Swift

How did a young woman from Reading, Pennsylvania conquer the Country music world? The story of Taylor Swift is a fine example of what happens when native talent meets drive. In a short span of 10 years and 4 acclaimed albums (as of this writing), Taylor Swift has found wealth and fame as well as acclaim from fellow artists as diverse as Neil Young, Aerosmith’s Steven Tyler, and Dolly Parton (one of Swift’s biggest influences). This article gives a brief history of her life and career and explores her songwriting and performance style.

Taylor Swift grew up on a Christmas tree farm near Reading, PA. From an early age, she sang whenever she could at coffee houses, fairs, and karaoke contests. At the age of eleven, she won a singing contest, and was awarded an opening spot for music legend Charlie Daniels at a local concert. That same year, she traveled with her mother to Nashville armed with recordings of Swift covering Dixie Chicks and Dolly Parton songs. She was rejected by every label, but was undaunted. She soon learned to write songs, and at age 14 was signed to a development deal with RCA Records. After making several trips back and forth to Nashville, the Swift family moved to nearby Hendersonville.

Although as part of the RCA deal Swift was learning advanced songwriting craft and recording demos, the label wanted her to start by recording other peoples’ songs. They also wanted her to wait until she was 18 before she released her debut. In a bold (but ultimately wise) move, she parted ways with the company. She was soon picked up by Big Machine Records, currently part of the Universal Music Group. 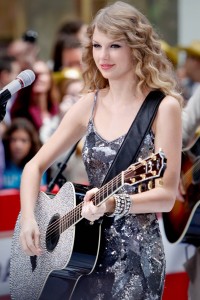 Career from 2006 to the Present

Taylor Swift’s debut album was released in 2006 (when she was 16) and contained the hit songs “Tim McGraw,” “Teardrops on My Guitar,” and “Picture to Burn.” She wrote or co-wrote every song on the album. Widely praised by critics, TAYLOR SWIFT not only topped the country charts, but reached Number 5 on the Billboard pop album charts. She toured extensively in support of the album. 2008’s FEARLESS was another huge hit, the longest-charting album by a female Country artist in the Billboard 200. Her most acclaimed album to date, it won a Grammy for Album of the Year, making her the youngest ever artist to achieve that honor. 2010’s SPEAK NOW was written in its entirety by Swift. It, too, topped the US charts and was a huge hit in Europe. She won Songwriter/Artist of the Year from the Nashville Songwriters Association and Country Artist of the Year from the Country Music Association. RED, released in 2012, found Swift experimenting with different music styles. It was number one on the Country chart for 16 weeks.

Taylor Swift’s style of songwriting has always been autobiographical. Even though many of her songs don’t have an overt Country sound to them, they still deal with love and loss in the truest Country tradition. (Despite frequently having a “Pop-y” sound, she labels herself as a Country artist.) She lists artists as diverse as Stevie Nicks, Paul McCartney, and Shania Twain as huge influences on her music. She has been widely praised for the honesty in her lyrics and her guitar-playing chops.

Taylor Swift has achieved acclaim across generations and genres because of her unique voice and talent. She has also managed to maintain a successful career at an age when many other artists either self-destruct or become irrelevant. She is poised to be a long-term success in American music.