Easy Songwriting with Your Acoustic Guitar

Home / Other Resources / Easy Songwriting with Your Acoustic Guitar

Undoubtedly, you have heard a song and thought, ‘Wow! I wish I could write like that!’ You may find it hard to believe, but you can learn the basics of songwriting with just an acoustic guitar, a bit of effort and, some basic tools. Within a short period of time, you can create your unique songs to share with others or enjoy playing by yourself.

Obviously, your very first efforts will probably not win you a Grammy. They will most likely be quite simplistic, but remember that even the greatest songwriters started off the same way. Be patient and enjoy the process. Also understand that you do not have to know music theory in order to compose. Many of our greatest songwriters (Bob Dylan and Johnny Cash, among others) never learned to formally read music but nevertheless became extremely successful. With that in mind, here are the basics.

A chord chart is essential for the beginner. They can be readily downloaded for free on numerous websites. They can also be purchased in book, card, or poster form at your local musical instrument store. You guitar instructor may have already given you one to study on the first day. The reason they are so important is that they contain all the chords in a given musical key. The guitar-based charts will also usually show recommended finger placement for each chord, which is great for a beginner and a nice reminder for the experienced.

Using this chart, choose a key and strum a few chords within that key. (As you are beginning, stick to one key and don’t get too adventurous just yet. There will be time for that later.) Find two or three chords in the key that go nicely together and alternate between them. Once you have found a working pattern, make a recording of them. It doesn’t have to be hi-fidelity; any recording instrument will work, including your PC, Mac, or smartphone.

Words of Love (or Anything Else)

It’s kind of early in the game to “find your voice,” although you eventually will want to aim for that. For now, simply find a thought or emotion you want to express and write it down. At this stage, take a “free-form” approach, do not edit or try to find the rhyme or the meter. Just write down what you want the song to express. Only once you have finished should you re-write with the intention of rhyming and using meter. A rhyming dictionary is a helpful tool for beginning poets and songwriters. Just as with the process of finding the chord progression that works for you, be patient with yourself. 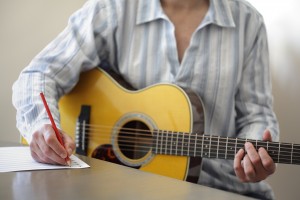 This is a new experience, so do your best to simply enjoy the process of creation. Don’t try to write The Great American Song on your first outing. If you are worried about your songs sounding too simplistic at the beginning, consider the first single released by The Beatles. LOVE ME DO has almost ridiculously simple lyrics and a very basic chord structure. But no one has to tell you where they went from there! Put in the effort and never give up. You may be the next songwriter people want to hear from.