Surfing became very popular with American teenagers on both coasts in the early 1960s. In Southern California especially, it became a lifestyle with its own look, style, and sound. In 1961, a musical group formerly known as The Pendletones wrote and recorded a song called “Surfin’”which celebrated the emerging lifestyle. Based on the strength of that song and its follow up,”Surfin’ Safari,” they were signed to the small Candix label. With the band’s name changed to The Beach Boys, a sound was born. In this article, we are going to review the surf sound and the surf guitar sound in particular.

The Basics of Surf Guitar 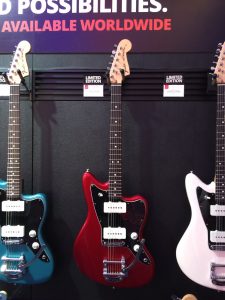 The surf music sound is dominated by electric guitars played with a spring reverb and using the vibrato arm on the guitar to bend the pitch of notes downward. This heavy reverb coupled with the bright tone of guitars with single-coil pickups (Fenders in particular) bring forth the feeling of waves crashing on the ocean. Most surf guitar players use heavy-gauge strings for maximum crunch. Surf guitar requires an amp that has a mix of clean treble and a round, clear bass tone.

Although many collectors pay a lot of money for original guitars and amps from the 1960s to replicate the sound, the good news is that you don’t have to pay a king’s ransom to get the right equipment for the sound. Replicas of the classic guitars and amps can be had at reasonable prices.

The Legends of Surf Guitar

The undisputed King of Surf Guitar is Dick Dale. He originated the sound by drawing on Eastern musical scales and heavy reverb, played in a staccato fashion, at a breakneck speed. He pushed the electric guitar to its limits of sonic quality, and even worked with Fender instruments to create the first 100-watt guitar amp to accommodate his playing. Among his influential recordings was “Miserlou,” which found a rebirth when it was used during the opening credits to 1994’s classic film PULP FICTION. He influenced Eddie Van Halen.

With all the focus on the unmatched vocal harmonies of the Beach Boys, it is easy to overlook how important their guitar sound was, especially in their first few years. Lead guitarist Carl Wilson perfected surf guitar at an early age, and influenced Pete Townsend, among others. David Marks, and then Al Jardine played rhythm guitar. Eventually, many of the studio guitar parts would be played by numerous session musicians while the band was touring. Most of the session musicians were part of the L.A.-based collective known as The Wrecking Crew. Among the guitarists used by The Beach Boys was Glen Campbell, who just a few years later would become a successful singer and recording artist in his own right.

Many of these same studio musicians were used by surf-rockers Jan and Dean for their records. This came at the recommendation of Beach Boy, Brian Wilson, who had stopped touring with the band and was focusing solely on crafting songs.

For an introduction to surf music, any compilation by Dick Dale, Jan and Dean and The Beach Boys (particularly ENDLESS SUMMER, which contains all of their early hits) is highly recommended.