Introduction to Guitar and Bass Tablature

One of the easiest ways to learn new songs on guitar or bass is to use tablature. Music stores are full of music books using tablature instead of, or in addition to, standard notation. These books can make it less complicated to learn guitar chords, leads, or bass lines. In this article, we will define tablature (or “tabs”), give you a few examples, and discuss the advantages and disadvantages of tabs. 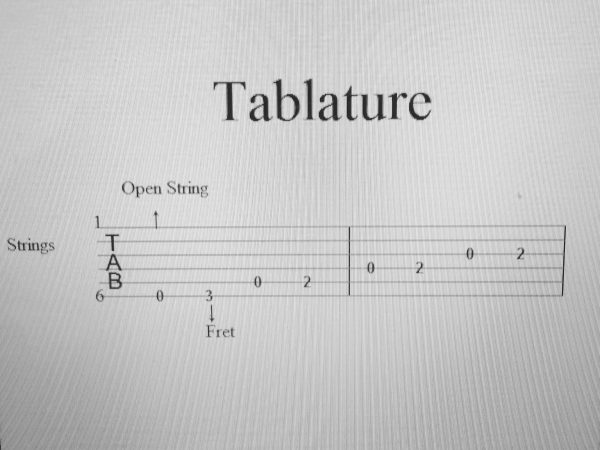 An example of bass and guitar tablature

Guitar tabs are essentially diagrams of a guitar or bass neck turned on its side. Most guitar tabs consist of 6 lines and most bass tabs have four lines, each line representing a string. The top line represents the high string; the bottom line indicates the low string. Just as with most standard notation, the bars are typically divided by vertical lines to indicate a measure. Numbers are used to indicate which fret to place your finger on, with 0 representing an open string, 1 indicating fingering on the first string, and so on. If the numbers are stacked on top of one another, they should be played together. If they are in succession, then they should be played one after the other.

Here is a good example of tablature, a notation of an easy-to-play holiday classic.

More advanced tabs include symbols indicating more advanced playing skills such as hammer-ons, pull-offs, bends, and vibratos. Although these are much more common with guitar tabs, they can be found in bass tabs as well.

The Advantages and Disadvantages of Tablature

In comparison to standard notation, tablature has some distinct advantages. Because it is a visual representation of the instrument’s fretboard, it makes for much easier interpretation for the player, especially the beginner. It takes the guesswork out of finger placement, so learning a song can be much quicker using this method. It is also much easier to type out tablature with a standard keyboard and without special software, making it easy to distribute electronically.

Despite these great advantages, tablature has several notable disadvantages. Tabs give no indication of tuning or pitch. Rhythm and tempo of the song are seldom indicated, and when they are, it is in limited terms. More importantly, tabs are instrument-specific. Any multi-instrumental piece would require tabs for each instrument. Multiple parts cannot be rhythmically distinguished in tablature. By contrast, standard (or “staff”) notation an be read and understood by all the musicians at once.

Another thing to consider: Despite the increasing availability of tab sheet music, most sheet music is still published only in staff notation, so using only tabs can limit your choices of available songs.

Where to Find Tablature

Many guitar-based magazines such as Guitar World and Bass Player offer tablature of popular songs every month, and are worth checking out. In addition, music stores typically have entire sections of music books that use tabs. Check to see what is available.