Consider the way humans speak. Few of us speak in a monotone. The vast majority of us use what is called vocal variety. In other words, our voices go up and down at various points. You should play your solos the same way. Play a few notes at a time; say between three and five notes. These phrases, with brief pauses in between, will draw in the listener’s attention and allow you to express yourself effectively. The way you play your partial scale should match the song as a whole.

What Not to Do

Don’t repeat yourself too much. With the myriad combinations of notes you can play within a scale, repetition shows a lack of originality. Take extra time to figure out different combinations. Experiment like crazy, especially while practicing. The more you work at this, the more great combinations you will discover.

Don’t concentrate on speed and mechanics, especially at the beginning. Concentrate on the actual music making. A blazing-fast solo or difficult guitar riff may attract attention, but it might not be the attention you are looking for unless it is laid down perfectly. Don’t put that kind of pressure on yourself, especially as you are learning. With enough practice, fast solos and impressive riffs may come as second nature. Don’t force it.

How to Make Your Solos Interesting

Once you have nailed down a few solos, you can make them more interesting with the occasional modulation, such as slides, pull-offs, bends or hammer-ons. You may also use a whammy bar if you have one. But use these effects sparingly! Think of it this way: You want these effects to be the seasoning, not the whole dinner. As you progress, you will be able to figure out how frequently you should use these effects. But err on the side of caution at first. Keep it simple. 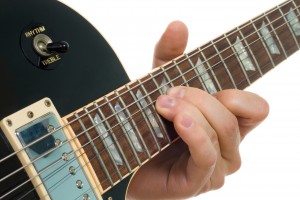 When beginning, we typically want to emulate our favorite guitarist. There’s no shame in that; many guitarists do very well for themselves that way. We all have to start somewhere. But how much more rewarding do you think it would be to develop your own distinct sound?

While developing as a guitarist, in addition to working hard at your solos, experiment with different guitars, strings, amps and effect pedals until that “a-ha” moment arrives and you have found your unique sound.

If you work hard and follow the patterns, you can become one of the greats. If you dedicate yourself, you may be surprised at how quickly it actually happens.