More Legendary Women of the Axe

In this article, we continue the biographies of great women in the world of rock guitar. Although the sub-genres each woman in this article are known for vary quite a bit, each woman’s influence in music is undeniable. 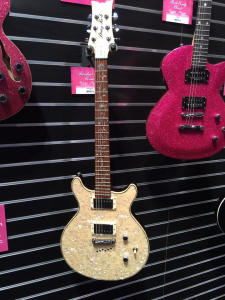 Born in Alberta, Canada, legendary folk singer Joni Mitchell began her career playing coffee houses in Saskatchewan. Eventually she made her way to Southern California and began touring the States. Classics such as “Chelsea Morning” and Both Sides Now” were covered by other folk singers, allowing her to sign a contract with Reprise Records in 1968. Over the next several years, she helped define the singer/songwriter era with classic albums such as BLUE and COURT AND SPARK, along with great singles such as “Big Yellow Taxi” and “Help Me.”  From that time through the time of her final album, 2007’s SHINE, her music has touched on various genres including jazz, rock, and folk.

Starting on ukulele, Mitchell switched to acoustic guitar in order to play along at folk music parties. She had contracted polio as a child, which left her left hand weakened, so she began using alternate tunings to play the songs she wanted to play. This would influence her complex compositions of later years. In 2003, Rolling Stone named her the 72nd greatest guitarist of all time; she was the highest-ranked woman on the list.

Jane Wiedlin was a founding member of the Go-Gos, along with lead singer Belinda Carlisle. The L.A.-based band started as a punk outfit, but changed to a more power-pop sound within a short time. Reflecting this change was the addition of lead guitarist Charlotte Caffey. After recording a demo and touring England with the popular UK group Madness, the band signed a deal with I.R.S. Records. Their debut album, BEAUTY AND THE BEAT, was a smash hit, containing the singles “Our Lips Are Sealed” and “We Got the Beat.” Two more albums and several singles followed before internal problems led to their initial disbandment in 1985. Since a benefit concert reunion in 1990, they have recorded new music sporadically and toured regularly. During their hiatus, Carlisle had a number of solo hits, occasionally collaborating with Caffey. Jane Wiedlin also had a successful solo career during that time, and has appeared as an actress in numerous films and TV shows.

Recommended recordings: BEAUTY AND THE BEAT, RETURN TO THE VALLEY OF THE GO-GOS

Of all the female acts to emerge during the Alternative movement of the 90s, none have had the impact of Polly Jean Harvey. Leading the three-piece band bearing her name, she exploded onto the scene with her debut DRY, an album teeming with confessional lyrics and brutal musical attacks. She followed this with her most influential and revered work, RID OF ME. She has continued as a solo act since then, continuing to confound and delight with her unique musical vision.

Recommended recordings: DRY, RID OF ME, TO BRING YOU MY LOVE

These diverse artists set a great example for any girl who yearns to pick up a guitar and play, and are just a small sampling of the many great female guitar players.