Finger Picking vs. Playing With a Plectrum

Which Style is Right for You – Pick or Pluck?

When playing a guitar, there are two different methods of picking: hitting the strings directly with your fingers, and playing with a pick, or plectrum. Both methods will produce great sound when done properly. But which of these two methods is best for you?
Each of these methods has its advantages and disadvantages. Each one is used primarily in one genre of music or another. There are also many players who alternate the methods for different songs. In this article, we will review the two methods in detail.

The vast majority of guitar players use a plectrum, or “pick.” These are generally small pieces of plastic that come in varying styles and thicknesses. A thicker pick will play louder but also have more of an impact on the strings, requiring string replacement more frequently if they are the only type of pick used. Thinner ones create a softer, “slapping” sound.

The advantages of using a pick are many. A pick gives you a more accurate and direct “attack” on the strings than finger picking and generally allows you to play faster. This is especially effective with harder, louder sounds like Hard Rock or Heavy Metal that require faster playing. It is by far the most used method for electric guitar.

The disadvantages are that you cannot generally play as softly with a pick as you can with your fingers, a problem that can be partially solved by using a lighter-gauge pick. 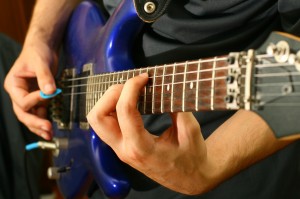 Finger picking is much more prevalent with acoustic guitars. By contrast to Rock, many styles of guitar such as Flamenco and Classical are played primarily with the fingers. Country players often use finger picking as well. Indeed, Country legend Merle Travis became so renowned for his finger picking that his style became known as “Travis Picking,” a method used to this very day by Country and Folk guitarists.

Finger picking allows you to develop a more personal style in your playing. You can develop a smooth sound or a hard one – it’s all in your fingers. It also saves you the expense of buying picks (although they really aren’t expensive). If you decide to make this your playing style, however, there are things you need to keep in mind.
In order to play finger style, you need to be more accurate with your playing than if you were playing with a pick. This will require extra training, practice, and patience. Another thing to consider is that if you play electric guitar, the lower action and narrower space between strings will make it more challenging to learn this method. It can be done and it can be quite rewarding. 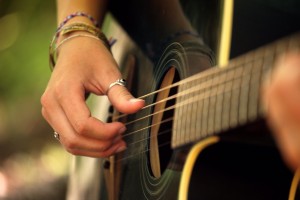 So Which One is Right for You?

Although certain styles of picking are more common in some genres than others, there are no hard, fast rules. No genre is exclusively one or the other. You ought to try both methods and see which one works best for you. In the end, it is strictly a matter of personal taste. You can become an accomplished guitarist using either method.