The Basics of Music Theory for Beginners, Part One

Home / Free Guitar Resources / The Basics of Music Theory for Beginners, Part One

The Basics of Music Theory for Beginners, Part One

The Building Blocks of Music

If you are starting out as a musician, the prospect of learning music theory may be overwhelming. Don’t worry! Just like learning a language or learning math, learning music theory starts with the introduction of basic concepts which act as building blocks for more advanced concepts. There’s an old riddle that asks, “How do you eat an elephant?” The answer is, “One bite at a time.” Take one concept at a time, master it, and then move on to the next one. This article, the first in a series, is going to review the most basic concepts of music theory, and is designed for beginners.

When looking at a piece of sheet music, you will typically see one or two sets of five diagonal lines (sometimes more). These are called staffs or staves, and are used for placement of notes.

(The symbol on the far left is called a clef. There are two types of clefs used in most music, the treble clef and the bass clef. The example shown here is a treble clef, which typically indicates the melody of a given song. In more complex pieces, multiple staves may be used. For simplicity, we will use a single staff with a treble clef throughout the article.)

The staff is the most fundamental building block in music theory, for it will indicate what notes are played, the rhythm of the musical piece, the spaces (or “intervals”) between notes, and the key the song is played in. It is always read from left to right.

In situations where the note would be above or below the staff, extra lines, called ledger lines, can be added. 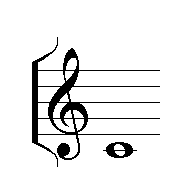 Notes themselves are drawn based on the interval (length of time) at which they are played. Here are the most common examples.

Most pieces of music contain a series of sharps or flats (known as “accidentals”) at the beginning. This indicates what key the song should be played in. Without getting too technical for now, it keeps things simple by preventing the need to write a bunch of accidentals into the music.

Here is an example of how a key signature works:

The above graphic indicates a B major scale, without key signature. Note all the accidentals (in this case, sharps) that need to be added to the music. This needlessly complicates things.

This shows the same scale with the key signature.

A key signature designates notes that are to be played higher or lower than the corresponding natural notes and applies through to the end of the piece or up to the next key signature. If a key signature indicates F sharp for example, all Fs would be played sharp in that piece.

As stated above, this is only the most rudimentary information. Future articles will expand on these concepts and add some new basics