The Gibson Les Paul: An Introduction

All About Gibson Les Paul, One of the Most Renowned Electric Guitars in History

Of all the renowned electrical guitars available, none have the reputation or the legend of the Gibson Les Paul guitar. Developed by Gibson Guitars in collaboration with the ground-breaking jazz guitarist whose name adorns the guitar’s headstock, The Les Paul has had quite a history since its introduction in 1952. It has a feel and tone unlike any other guitar you will ever play. This article gives a brief history of the guitar.

In 1950, Fender Instruments introduced the game-changing Telecaster, the first successful solid-body electric guitar. Not to be outdone, Gibson consulted with Les Paul, who, in addition to being a popular guitarist, was also an innovator in electronics. Deciding to make a well-made, upper-end guitar, they developed a guitar based on a more traditional design than Fender’s.

The first Les Paul model, called the Goldtop, was constructed of mahogany with a maple top and featured two single-coil pickups. This was followed in 1954 by the Les Paul Custom, which was finished in black. It had a mahogany top to differentiate it from the Goldtop model. It had a new bridge design, and from 1957 on, featured humbucking pickups.

Still more models followed: The Junior (a simpler, lighter variation for beginners and students), the TV (a variation in a soft yellow that wouldn’t glare as much on black and white TV broadcasts as white guitars) and the Special, which featured “soapbox” pickups. The Les Paul Standard was the final original guitar in the initial series, essentially a remake of the Goldtop with a different finish.

Gibson decided to make a change in the style of their guitars, and so introduced the Les Paul SG (“solid guitar”) with a double cutaway design. Les Paul distanced himself from Gibson during this time (he liked the sound of the SG but wasn’t happy with the construction), so the name was eventually shortened to SG, minus his famous name.

As hard as it seems to believe now, the Les Paul found itself out of favor with guitarists by the late 1950s, and the style was discontinued in 1960. That would not last. At the dawn of the classic rock era, many famous guitarists such as Keith Richards and Eric Clapton began using late model Les Pauls, particularly the 1959 Standard edition. Due to this resurgence in use by respected musicians, the resulting demand caused Gibson to resume the manufacture of the guitars in 1968, and they have been available ever since. 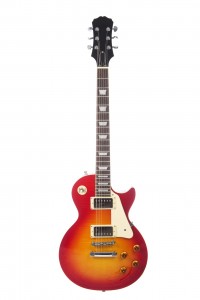 Today, there are over 75 different Les Paul models available from both Gibson and Epiphone. Epiphone’s models are mostly decent-quality, low-cost replicas of Gibson’s Les Pauls, although there are some Epiphone models that have unique features and are as well-made as many Gibson models. As for Gibson itself, they have been continually offering new, innovative Les Paul models, while at the same time continuing to offer its classic models as well.

If you are still wondering what all the fuss is about, find a Les Paul model, pick it up and play. You’ll understand.