The Pros and Cons of Epiphone Guitars

An Introduction to the Epiphone Guitar Brand

Founded in 1873, Epiphone is one of the oldest and most respected guitar brands in the US. For over 140 years, they have been making popular models of guitars, basses, and other stringed instruments and count many famous musicians as players. In 1957, the company was purchased by long-time rival Gibson, and today makes lower-priced versions of renowned Gibson guitars, as well as continuing to make and market its unique classic designs. This article reviews a brief history of the brand as well as the ups and downs of owning and playing an Epiphone guitar

Epiphone started in 1873, in Smyrna, Ottoman Empire (now İzmir, Turkey). The name “Epiphone” is a combination of proprietor Epaminondas Stathopoulos’ nickname “Epi” and “phone” (from Greek phon-, “sound”/”voice”). Initially, Epaminondas’ Greek father Anastasios (the founder) made lutes and fiddles. The family moved to New York at the turn of the 20th century and eventually added mandolins and banjos to the company’s lineup. They made their first guitars in 1928. They became famous for their “flat-top” models, which rivaled the quality and design of their chief competitor, The Gibson Guitar Company. In 1957, Gibson bought Epiphone. Gibson then began marketing Epiphone guitars as alternatives to their own line, often using the same materials and designs. This gave them a considerably large share of the guitar market.

Among the many classic Epiphone guitars produced over the years was the Casino, a favorite of John Lennon’s. He used it as his primary guitar on REVOLVER, and can be seen playing on the promotional videos for RAIN and PAPERBACK WRITER and throughout the film LET IT BE (particularly during the rooftop concert sequence). The Sheraton, The Dot, and several other original designs have proven popular with guitarists. The Jack Casady Signature bass is a popular model based on the Casino.

What makes Epiphone popular today is their low-cost replicas of classic Gibson models such as the Les Paul and BB King’s Lucille. These offer the same design but use cheaper materials and are made overseas rather than domestically (although there are exceptions).

The Pros and Cons of Owning and Playing an Epiphone

When choosing an Epiphone guitar, keep in mind that you are purchasing a decent guitar that will last you for years with proper handling, care, and regular maintenance. Many of these models rival their Gibson brothers in terms of playability and sound. You can also find variations on models (particularly the Les Paul) that Gibson doesn’t offer under its own brand. This includes unique features and colors. 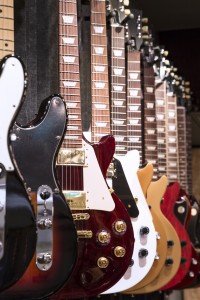 If there is a drawback to playing an Epiphone versus a Gibson, it is that they are usually, though not always, made overseas. This can on occasion bring about quality control issues, whether with the finish or the components. The guitar may also not last as long as a Gibson. If you are a beginning or intermediate player, you should strongly consider an Epiphone, as it will probably serve your needs just fine. If you are moving into the professional arena, and particularly if you are gigging, consider a higher-end Epiphone or a Gibson model for your needs.

Want to Find Out More?

Check out reviews in Guitar Player, Guitar World, and Bass Player magazines. Also visit http://www.epiphone.com and http://ww2.gibson.com for information on their guitars.