Investing in a Proper Guitar Amplifier

Nowadays, guitar amplifiers tend to be quite varied in their characteristics and newcomers to the playing scene often end up a bit confused regarding what they should choose for themselves. Before settling on any particular model of amplifier, consider the following points carefully – this should get you started nicely enough.

What’s your primary use of the amp?

This is the most important question to ask yourself, as it will determine exactly what kind of an amplifier you’ll be buying. If you need something for practicing and learning the ropes, you won’t generally have to spend a lot of money on a high-grade model, and something in the 5-15 watt range should do just fine.

On the other hand, if you need the amp for live performances in a hall of considerable size, you should go with a model with a significantly high power output, commonly around 50-100 watt or even more. Bass guitars need even more power than regular models, and they require a high-grade amp even for practice purposes.

If you’re still learning the basics, it’s generally not a very good idea to get a highly expensive amp – if you’re planning on getting serious with your playing later on, you’ll probably get your hands on some significantly expensive models soon enough, but you’ll have to figure out how to use them properly first.

Most solid state amps in the 15 watt range can be acquired for less than $100, though this disregards most of the extra options – but even with those you shouldn’t have to pay more than $300 for a “complete” solution. Solid state amps are good for a first-time purchase, as you won’t have to keep replacing those tubes as they burn out. Also, remember that as your skills improve, you’ll want to improve your equipment as well – so put some money on the side and save up for an expensive model.

What controls are available?

With most amps nowadays, you’ll get at least two input channels – basic amps come with a master volume, bass, treble and distortion controls, and may additionally have individual controls for each separate channel. Also, you may want to consider models that give you a more precise control over the gain, reverb and the midranges. 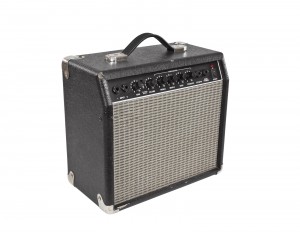 Remember – this is just your first amp!

Amps nowadays keep getting better – so never regard your first amp as your last one. Always keep an eye out for new and better models, and consider if they can improve your playing given your current skill level. Of course, try out the way different technologies work so that you don’t end up spending a lot of money on something you later decide doesn’t suit your playing style.

We keep mentioning these terms – and you may be a bit confused if you’re not familiar with them. Generally, these are the two main types of amps available on the market. The first type, solid state amps, are based on solid state circuits designed with transistors, while the so-called tube amps operate thanks to valves and vacuum tubes. 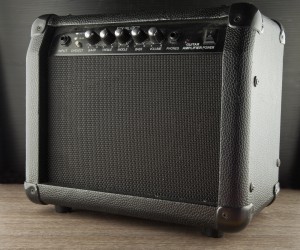 There are also combined models – but keep in mind that the reign of tube amps may be nearing its end, as recent advances in circuit printing technology have made it possible to mimic their sound quality very closely through traditional solid state circuits.

This, combined with the overall high level of maintenance required by tube amps, should point you in the direction of solid state models in general – but you should still give a try to some classic tube amp models in order to be sure that you’re not missing out on something you may potentially like better.