Introduction to the Dobro

The world of resonator guitars

If you are looking for a different kind of stringed instrument, you may want to consider playing a dobro. Dobros are commonly used in blues, country, and bluegrass music, but are found in most pop genres. This unique guitar has a sound all its own and is much more versatile than you may realize. Let’s have a closer look at this great instrument. 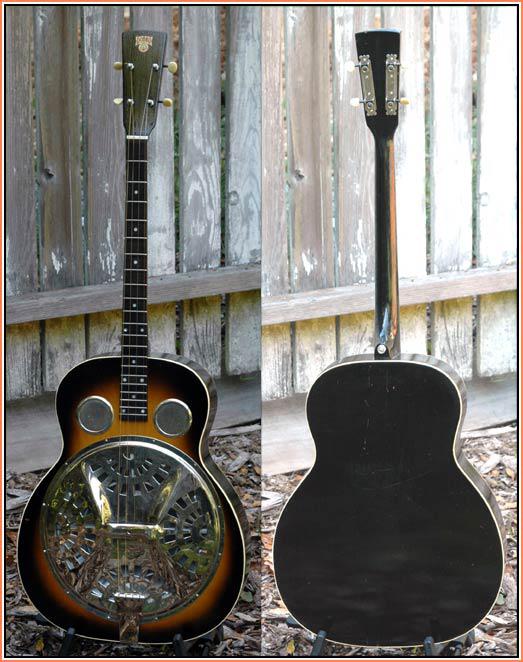 What is a dobro?

The term “dobro” has become a generic term for guitars with a built-in metal resonator, although it is, in fact, a brand name. The Dobro was originally made by the Dopyera brothers when they formed the Dobro Manufacturing Company in 1928. Not only was the name a contraction of “Dopyera Brothers” but it also meant “goodness” in their native Slovak tongue. The brand is now owned by Gibson Guitar Corporation and marketed by their Epiphone division. There are many other manufacturers of resonator guitars such as National, Liberty Guitar, Hohner, and Shubb.

The photo above is a good representation of what a dobro looks like, although it is a four-string model. (Most are six-string.) It is distinguished by its built-in resonator, which is made of metal and takes the place of the traditional sound hole of an acoustic guitar. The resonator serves as an amplifier. There are two types of dobros: squareneck and roundneck. Roundnecks are typically played in blues music. Squarenecks, preferred by bluegrass players, have strings that measure 1cm off the fretboard and are played on their backs with the strings facing up. In contrast, roundnecks are held like a traditional guitar. Bluegrass players typically tune their dobros to GBDGBD, although some dobro players veer to alternate tunings.

As indicated above, what style of music you play in will likely determine which type of dobro you use and what method you would use to play it. Blues and rock musicians are more likely to play it like a traditional guitar. Country and bluegrass players are more likely to play it on their lap. There are no hard, fast rules however. Once you have begun to play it, you will figure out what method works best for you. you will also decide whether to use a slide as most players do, or simply pick and strum.

Among the world’s premier dobro players, past and present, we have David Lindley (Jackson Browne’s longtime collaborator), Grammy winner Jerry Douglas, Eric Abernathy, and Johnny Bellar. They are all worth checking out.

Check out videos on YouTube for great examples and inspiration. If you already play guitar, you may just want to start playing the dobro.