The History of Jackson Guitars

Jackson guitars are well-known for their craftsmanship, their unique designs, and their heavy use by rock musicians the world over. Although it is a relatively recent brand (it began in the late 70s), it has become a well-respected line of guitars and basses. This is the story of the company.

Wayne Charvel, a former Fender employee, started Charvel’s Guitar Repair in Southern California in 1974. He repaired and refinished out-of-warranty Fender instruments. He eventually began making complete guitars in-house. In 1978, Charvel sold his business to employee Grover Jackson, who promised to bolster the Charvel brand. Charvel became renowned for its “Superstrat” models, which were similar to Fender Stratocasters in shape but had single humbucking pickups and bridge tremolos. These were found ideal for hard rock guitarists, and the company’s popularity grew along with the Los Angeles glam rock style.

In 1980, a relatively-unknown yet innovative guitarist named Randy Rhoads approached Jackson about customizing a guitar for him. Rhoads had just left Quiet Riot and had joined the new band of former Black Sabbath vocalist Ozzy Osbourne. He wanted a very angular design similar to the “Flying V.” Because Grover Jackson was concerned that the style was so radically different from other Charvel models, he decided to brand it with his own name instead, and thus the Jackson brand showed up on a guitar for the first time. Rhoads’ subsequent success as Ozzy’s guitarist, and the high sales of the Rhoads model (dubbed “The Concorde”) proved to be the impetus for the official launch of Jackson Guitars. A second guitar designed for Rhoads was only used by him a few times before his untimely death, and is still marketed today as the Jackson Randy Rhoads.

Famous rock guitarists who use or have used Jacksons include the following:

In addition to the Randy Rhoads model, there are several other innovative guitars available from Jackson:

The Soloist: A neck through “Superstrat” slightly smaller than a Fender Strat,

The Dinky: A similar guitar, with a bolt-on neck

The Kelly: An angular model, similar to a Gibson Explorer

The King V: A sleek V-shaped guitar, originally used by Robin Crosby of Ratt, and currently used by Dave Mustaine

The Warrior: An extremely angular style loved by Metal guitarists.

In addition, there are numerous “autograph” and “artist” models available. They also offer built-to order guitars through their Custom Shop. 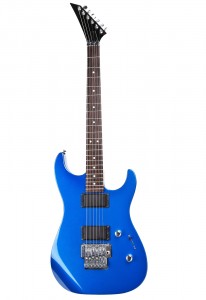 If you want to see these beautiful guitars up close and personal, check out your local guitar shop or http://www.jacksonguitars.com.