What Is an Ibanez and Why Should I Play One?

Home / Guitar Equipment Resources / What Is an Ibanez and Why Should I Play One?

An Introduction to Ibanez Guitars

Founded in 1957 in Japan, the Ibanez brand has adorned many great guitars and basses. Quite a few noted guitarists and bassists use their products. This article goes over a brief history of the brand and its products.

A Brief History of Ibanez

Ibanez’ parent company, Hoshino Gakki, began in 1908 marketing musical instruments. In the 1920s, they began importing Spanish guitars from Salvador Ibáñez Company. After that company was purchased by Telesforo Jube in 1933, Hoshino Gakki began making its own Spanish guitars, marketing first under the name “Ibanez Salvador,” and eventually shortening the name to Ibanez.

After officially launching the company as Ibanez in 1957, they began making guitars with unique and wild designs. Their real success came when they began manufacturing lower-cost replicas of popular US guitar designs. By doing this, they became one of the first Japanese guitar companies to gain a foothold in the American market. They proved to be almost TOO successful, as they were hit by a lawsuit. Gibson’s parent company, Norlin, sued them for copying their headstock design. Hoshino USA and Norlin settled out of court in 1978. From that point onward, Ibanez stopped making replicas and focused on its own unique designs. This would prove to be an even wiser move.

During the 1980s, many guitarists, particularly Hard Rock and Metal players, embraced the design and sound of Ibanez guitars. Many guitarists and bassists looked for the same axes that their heroes used. As a result, Ibanez profited greatly. As the popularity of Metal gave way to Alternative, Ibanez lost some of its footing, but their product is still very popular.

So, why play Ibanez?

Here is a brief list of some of the better-known Ibanez players, past and present:

Jazz great George Benson has his own signature guitar model, the GB.

Denny Laine from the Moody Blues and Wings used Ibanez guitars during the Wings Over America tour.

Renowned Rock guitarist Joe Satriani has his own signature model.

Bob Weir of the Grateful Dead played Ibanez guitars during the 1970s and 1980s.

Paul Stanley of KISS has an Ibanez artist model.

Legendary jazz guitarist Pat Metheney plays Ibanez, and has his own signature model.

Brian “Head” Welch and James “Munky” Shaffer of the Grammy-winning band KoRn are both Ibanez players, as are Dexter Holland and “Noodles” from The Offspring.

Ibanez offers a wide variety of acoustic and electric guitars that stand up quality-wise to virtually any other brand out there. They are built to strict quality standards from solid, well-made materials. They have a look, sound, and feel that you will like. Best of all, they tend to be less pricey than other brands, giving you the option of a well-made guitar at a good price. If you want to find out more, go to http://www.ibanez.com or visit your local guitar shop. 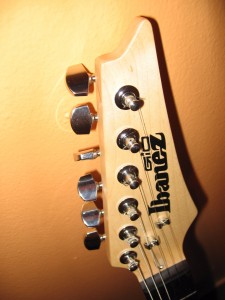