Many beginner guitar players tend to disregard the importance of choosing the right guitar picks for their playing, but if you want to get on the right track as soon as possible, you have to realize that making a careful choice for your picks is going to have a significant impact on the overall quality of your playing later on.

There are several general types of guitar picks you could choose from, mainly divided according to their shape.

Triangular guitar picks are probably the most commonly used ones, and some people even call them “standard” picks. You play by gripping the pick at the wider end while using the narrow one for the actual picking.

Equilateral picks are also triangular in shape and according to some people they’re a lot easier to hold – the picks are shaped in a perfect triangle and you don’t have to hold them by a specific side to do it right. Plus, they tend to be a lot more durable compared to other types of picks. You can use another end when one end gets worn out.

Next up we have thumb and finger picks – they are attached to the end of your fingers and the best way to visualize the way you’re supposed to use them is to imagine the pick as a fake fingernail, making them perfect for people who prefer the more natural playing style of using your fingers, but don’t have the necessary long nails to accommodate to that style. Apart from being convenient for use, they also tend to produce a brighter sound that’s noticeably different than just plucking the strings with your finger.

The thickness of your guitar picks is going to have a huge impact on your playing style and the way your music sounds. There are actually some specific notations for the different standard thicknesses of picks, usually printed on the picks themselves, and they are as follows:

T – stands for “Thin gauge,” these picks are traditionally between .50mm and .60mm wide. Thin picks tend to be a bit more flexible, and can produce much more varied sounds.

M – this means “Medium gauge” and is the most commonly used type of pick, ranging between .70mm and .85mm in thickness. Medium picks are perfect for beginners who want a more balanced solution.

H – next up we have Heavy gauge picks, which can be between .94mm and 1.20mm thick. These are very popular among heavy metal players as they can easily put a lot of strain on the strings, and are very durable as well.

XH – Extra heavy gauge picks are thicker than 1.21mm, and are very commonly used by bass players.
There’s no perfect size for everybody – you’ll just have to try out a few picks and see which sounds best in your hands, and try to stick to that for the future – but make sure you’ve explored all your options before settling on any particular one! 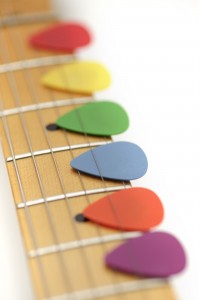