Bass guitars are very different from one to the other, and choosing the best bass guitar for beginners can often be complicated. With so many variations, it’s very important that you take the time to research all the factors involved in your decision, before you even set out for the actual shopping.

Before you begin, figure out where you stand with your budget. Most bass guitars start at around $200, though you can get one for $100 if you’re okay with going with a used one. Entry-level guitars like this are the perfect option for a beginner because they sound good enough and they can help you get a good feeling for the instrument while you’re starting out, without setting you back significantly. So if you later decide that the guitar you’ve chosen isn’t the best for you, at least you’ll know that you didn’t spend thousands of dollars on it.

Next you should decide between a 4-, 5- and 6-string bass. Generally speaking, a 4-string bass is the most commonly used one, and it’s also the most suitable one for beginners. 5- and 6-string bass guitars give you a greater degree of freedom for experimenting, and they’re useful for bass players who frequently perform solos. Beginners should definitely start out with the basic 4-string bass, because it’s much easier to learn on it. Basic techniques don’t require more than 4 strings so it would be a waste of money to pay for those at this stage. 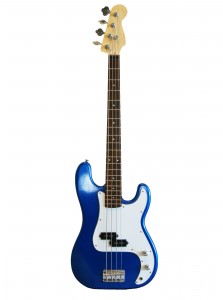 Similarly, bass guitars can be purchased with or without frets. Like with extra strings, this is a feature that’s mostly only useful for people with sufficient talent and experience with the instrument to make proper use of it. Frets can make a bass guitar easier to play by marking each semitone distinctly, and producing a very consistent intonation, while making beginners with the bass more confident in how they’re handling their strings. With that in mind, fretless bass guitars have a very distinctive sound associated with them that is sought after by many experts. Without frets, the bassist would press the string directly against the wood of the fingerboard, which produces a rather muted intonation as opposed to a fretted bass guitar.

Probably the most important factor to remember when purchasing a bass guitar though, is how comfortable you feel playing it personally. This concerns everything, from the weight of the guitar to the neck length, to the width of the body – these factors can all influence how comfortable your bass guitar is for you. Remember that the way the guitar feels on you is far more important than how it looks like, or its price – don’t sacrifice your comfort for any other feature, especially aesthetics.

Last but not least, remember to keep an eye on the wood the guitar has been made from. The wood typically used in the manufacturing of a bass guitar has a strong impact on its tone, and it’s not something you should worry about as a beginner but it’s definitely interesting to know that Alder is used most commonly for the body, with maple being found on the neck most often.